Tourists are allowed to come to France! – our first hand account. 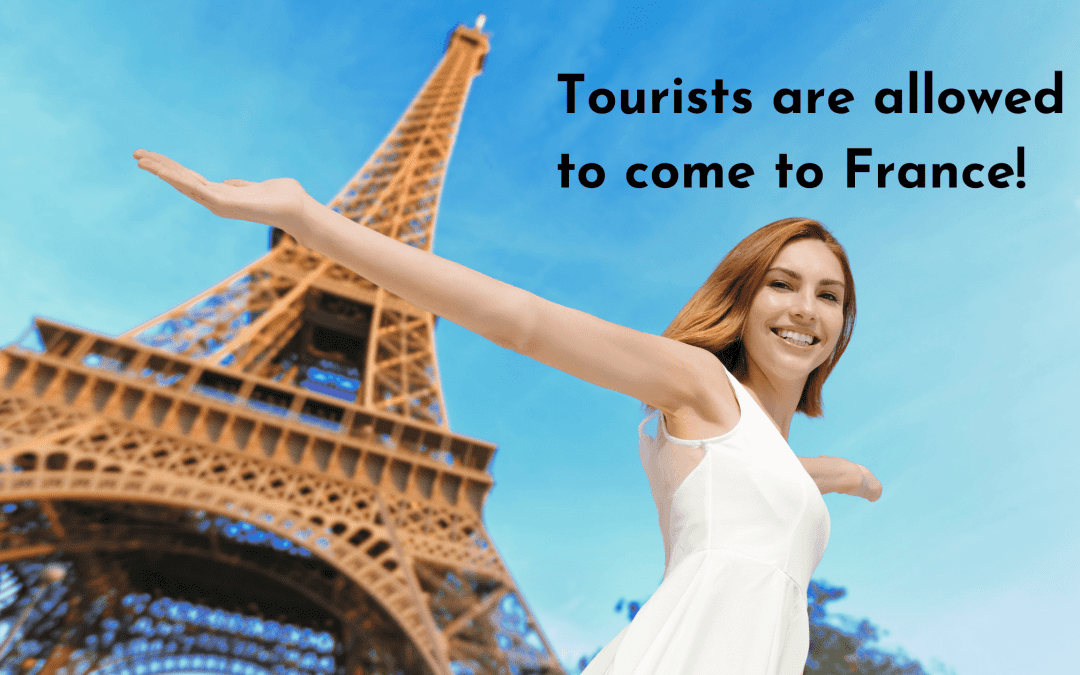 Our dear Friends Harold and Mary Donn landed this morning in Paris at CDG (11/06/2021). They flew United from DC. They are not French residents and came here as tourists. I welcomed them in their beautiful apartment at rue Cler and I asked them a few questions about their experience from the moment they booked their tickets until they got in the taxi at CDG. Because you have to know that tourists are allowed to come to France again!

Justyna: Welcome back! I’m so happy to see you both again! A year and a half is away too long. TO sum up: you just flew into Paris from DC (Washington DC, US), without any residency card or any compelling reason. Just as tourists. Please tell us, how was your experience from the moment you were booking your tickets.

Harold: Well, when we went online we bought the tickets, it was before we were allowed to come, we didn’t know we would be allowed. Macron had made the statement that they will be open to American’s on June 9th but they hadn’t had any procedures and so wasn’t until three, four days ago that they had any idea what the procedures were going to be.

Harold: And yet they were very simple, they could have done them months ago but they didn’t. So when we got there, they sent us to a site for the French government, but the site basically hadn’t been updated so they gave you the things to bring and one of them was a statement that you had an exceptional reason for being here, which no longer attached to American’s, and so we filled it out without filling out with what our excuse was, but we carried it with us just in case, but they never asked for it. What they did when we got there, is that they asked us for evidence of vaccination.

Justyna: And what was that?

Harold: We used our CVC card which is a card that you get when you get your vaccination, we got the Moderna, which has the two dates you got the vaccination. Cause we had to be at least two weeks beyond the point of the vaccination in order to get into France.

Harold: So it was that plus we had a statement that we were healthy, we didn’t have any sort of group of symptoms and that we hadn’t contacted somebody who we knew had.

Justyna: But it was not from a doctor, you just filled it out yourself?

Harold: No, no, this is all stuff. It was a self-certification.

Harold: And then we got on the plane and… we had to have tests. There are two tests that you can have. One is a PCR test, which is the most accurate, you could have that within 72 hours of getting on the plane. However, there is also the antigen test which is a little less accurate, but so they make you have it within 48 hours of getting on the plane. We just went to our local drugstore CVS and got them and they came to our car and we stuck it in our own noses. We did the whole thing. So that was simple enough and didn’t cost anything, because the government picks it up. They didn’t even ask us for insurance.

Justyna: So at CVS you just get it for free?

Harold: Absolutely for free. They didn’t ask us anything. We just showed who we were, and they did it.

Justyna: And then you got the test results in how long?

Harold: It took us about an hour and a half or two hours.

Harold: Yes, so technically you can get it, chemically within 15 minutes, but you will have to go through the processing and then they send us the documentation to our cell phone, so if you could download it on paper which we did or you could have it on the app which shows the information about you.

Justyna: On the app for CVS?

Harold: CVS has an app, not sure if all of them, whoever you would do it with, even if just an email you can show them the email on your telephone and that should be enough, cause they were really not so specific, as long as it has somebody else’s letterhead and identification so it doesn’t look like we created it ourselves.

Harold: So that was it, moving on. On the plane there was a form that we got at the airport that they collected on the plane that had information about the contact details of someone in France. So that was it, big pick up on the airplane before we got off… and then when we got into Paris, we got to the douane as we normally do. They asked for one more document. They asked for proof of vaccination and our card.

Harold: The vaccination and the proof of the tests. That was it, plus our normal stuff.

Justyna: On the plane were you obliged to keep the mask on all the time?

Justyna: OK, but you could eat? They were serving food and drinks?

Harold: Oh, we flew United, and they tell you that you have to put your mask on between bites which makes no sense, but no, nobody did that of course. So it was very simple. The presentation was modified because everything was served on one tray instead of being served as courses. And it was typical United food, not really great but semi-edible and you didn’t get ceramic or porcelain plates or anything like that… everything was disposable. Everything was in plastic and covered things like that (…). We are back in Paris.

Justyna: What are you going to do in Paris, what are your plans?

Harold: You know our plans are to be here, not anything, visit our friends, just hang out, that’s what we do in Paris all the time anyway so don’t have many plans.

Justyna: Thank you so much. Enjoy your stay!