Where to live in Paris as a family? Part 1 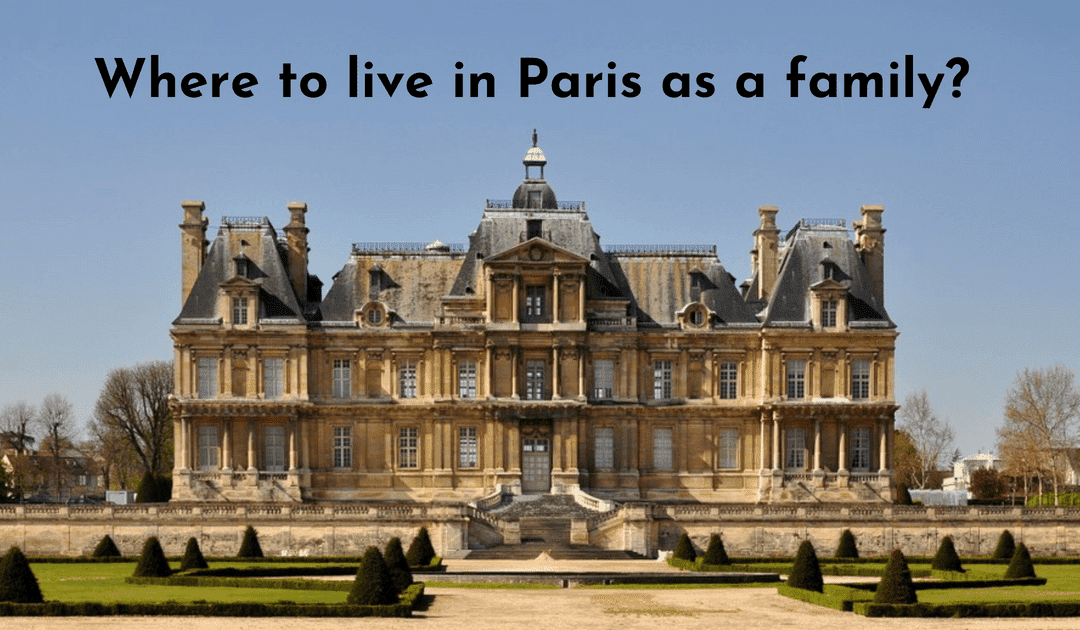 Where to live in Paris as a family? – Living in: Maisons-Laffitte

Waking up to a forest view and the sound of birdsong. A short bike or car ride across town to drop the kids off at school. Bumping into friends at one of the main street cafés or shops. Jumping onto the train to whizz into Paris for work or a culture fix. So goes a typical morning in Maisons-Laffitte, where you sometimes have to stop and ask yourself: How you have been so lucky to end up here? Sounds like your kind of town? Let me walk you around.

Maisons-Laffitte is a historical and affluent city located in the Yvelines department, to the northwest of Paris. Just 18 km from the center of Paris, and served by both the RER A and Transilien train lines, you can be in central Paris in under half an hour and in La Defense in under 20 minutes. Adding to this are the various bilingual school options in and around the town. With clean air and open green spaces, Maisons-Laffitte is, unsurprisingly, a popular choice for expats moving to Ile-de-France.

“It’s so easy to get into Paris on the RER. There are trains every 5 minutes or so, so you can just show up and hop on.”

Big enough to have all you need and small enough for you to bump into people you know every day. Maisons-Laffitte may just be the perfect size town. The “problem” with moving there, as described to me by one Parisian, is that you will never need to visit Paris again.

Here you have the authentic French high street experience in abundance. Epiceries, boulangeries, cheese shops, butchers, cafés, restaurants, as well as numerous supermarkets are all around. My absolute favorite restaurant/café is the “Comptoirs de deux frères.” You can enjoy a coffee or lunch from the menu du jour on their newly renovated terrace.

The town also has loads of amenities to keep you and the kids busy. A cinema, sports center, swimming pool, and more can easily be found. Additionally, it is also the equestrian capital of Ile-de-France, counting dozens of riding schools and the region’s largest hippodrome.

And oh is it pretty! Bound by the Seine on one side and the Forest of Saint-Germain on the other, Maisons-Laffitte is one of the 21 ‘Imperial Towns” (Villes Imperiales) in France. It is also distinguished for its rich cultural heritage. For example, the 17th-century Chateau de Maisons-Laffitte and the “parc”, a large green area of leafy avenues in a symmetrical pattern. In fact, the “parc” was originally part of the Maisons-Laffitte castle grounds.

If you don’t know where to live in Paris as a family because of schools for your children, Maisons-Laffitte has a good range of public and private school options. Chief among these is the Ermitage International School of France. Ermitage offers a fully bilingual French/English program from pre-school through to high school. It follows the French curriculum and also has an English-only IB program from middle school onward. The school prides itself on its internationalism, boasting over 70 nationalities among its students.

A 15-minutes drive away is the Lycee Internationale of Saint-Germain-en-Laye which offers 14 different international “sections.” It provides a foreign linguistic and cultural complement to the French national curriculum, and is the highest scoring international high school in France.

In Maisons-Laffitte itself there are private school options for pre-school and primary school. Also, there are great public options from nursery up through high school.

Maisons-Laffitte is a cosmopolitan town. Non-French nationals account for almost 10% of Maisonniens which you notice by the languages you hear all around town. It has an active international association that organizes events for adults and families alike, including bike rides, cooking, French lessons, wine tasting, and regular meet-up aperitifs.

Where to live in Paris as a family? – Housing

The Covid-19 crisis has led many Parisians to move out of the city for more space. Maisons-Laffitte is a popular landing ground with a wide range of housing available. At the high-end, the “parc” boasts many large detached houses ranging from nineteenth-century maisons, each with their own style, to modernist style homes featuring concrete and sharp angles. Adding to this are townhouses in the city centre and a range of apartments, including in the “parc.” There are loads of housing options within walking distance of the train station.

Fun fact: While the origin of the famous “Paris-Brest”, a round pastry in the form of a wheel, is disputed, some credit its creation to patissier Louis Durand of Maisons-Laffitte to commemorate the Paris-Brest-Paris cycling race.

Insider tip: There is a fantastic market selling fresh, local produce as well as some cooked food – open Wednesdays and Saturdays, 8:00 to 13:00.

If you needed to know where to live in Paris as a family now you are familiar with our proposal. Book a free call with Your Friend in Paris and let us know about your plans to move

In case you need a nanny, and you don’t know how to hire a nanny in France check our step-by-step explanation.