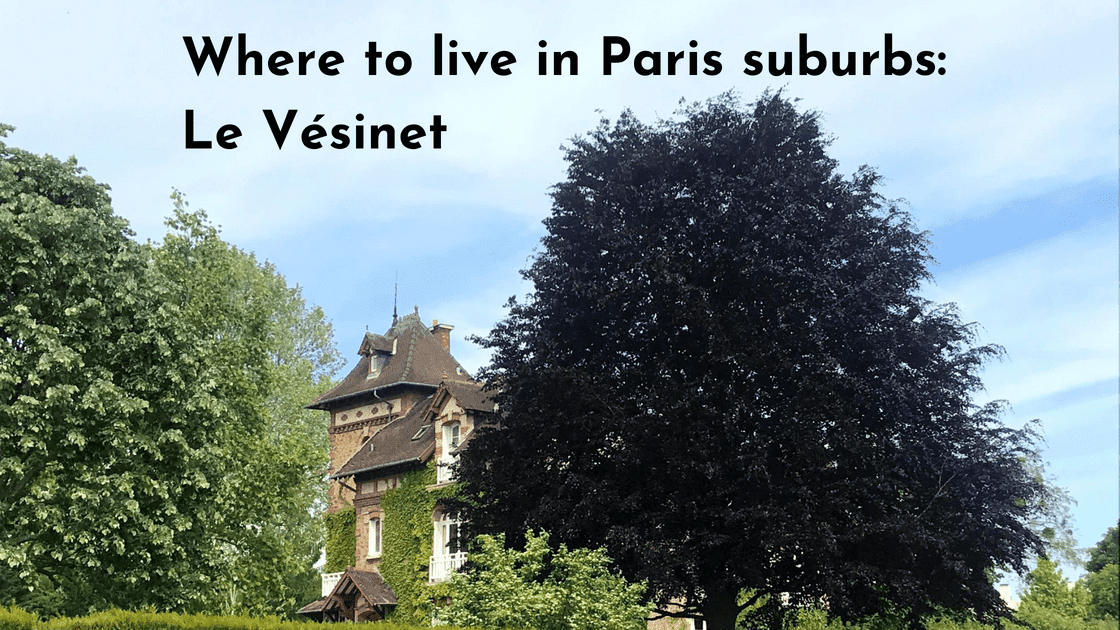 Where to live in Paris suburbs: Le Vésinet

A haven designed in the mid-19th century for Parisians seeking respite from the crush and dust of the capital, Le Vésinet’s design was inspired by the British concept of “garden cities” that combine the best parts of both urban and rural life. Originally, it was a just forested chunk of land encircled by the winding Seine. Then, purchased by a private company who set about making it into a des res (desirable residences) for bourgeois Parisians. The bourgeois moved there in droves to build their little corner of paradise which remains today.

These town planners knew what they were doing back then! So forget any negative connotations you may have about planned communities of the more modern variety. Le Vésinet is seriously elegant.

Where to live in Paris suburbs: Le Vésinet

The town center is compact and set out in a classic grid pattern with a central square. What sets Le Vésinet apart, however, is what surrounds the town center, and what gives it the title of “ville-parc”. The town counts around 30 hectares of green spaces. There are at least five artificial lakes linked by four kilometers of streams and bordered by meandering footpaths. Not bad, eh? The roads traversing this green space are not straight. Instead, they are set out in long sweeping tree-lined curves inviting you to shake off the typical frenetic city march. You’ll want to slow down to a more ambling pace as the noise of the capital gives way to birdsongs.

Le Vésinet also proudly holds the highest distinction in the national competition for floral towns and villages. Yes, that’s a thing in France. Just looking at Le Vésinet’s striking flower displays will let you know that they are serious about holding onto it too.

All this is not to disparage the town center, which is not only very pretty but has everything you need. “What I really like about Le Vésinet is that you can basically live without a car”, says Marie-Laure Bricout, who grew up in the town and decided to return there as a parent following many years living abroad. “In the center you have banks, real estate agents, loads of great restaurants and food shops, doctors… it’s really practical.”

There are small supermarkets in town and larger ones a short cycle ride or drive away. “What’s great about the supermarket is that you can do your shopping then leave it all at the shop. They’ll deliver it to your door two hours later” says Marie-Laure. There is also a fantastic fresh market that is held twice per week in the town center. Here you can pick up fresh fruit and veg, fish, meat, cheese, and so on.

While the City of Lights is still at your doorstep, you also have a good range of options in town including a cinema, a theatre, a library and a conservatoire, for your cultural itches. For sports, Le Vésinet has its own sports union. Here you can find an offering of classes across lots of activities including: football, tennis, gymnastics and martial arts.

Like Saint-Germain en Laye and Maisons-Laffitte (see our other blog posts SGeL, M-L), Le Vésinet is on the RER-A train line, which whips you into the center of Paris in under half-an-hour. Marie-Laure gave us an insider tip that when there are transport strikes (yes, you are in France after all!) Le Vésinet is one of the few stations that usually continues to provide trains into the capital.

Geography-wise is Le Vésinet’s proximity to Rueil-Malmaison is another plus. The headquarters of several large companies including Schneider Electric, Vinci and Unilever France, can be found in Reuil. You’re also close to Nanterre, home to many more headquarters including the business district of La Defense. For those working in these major business hubs, Le Vésinet is an obvious choice.

Le Vésinet has a wide range of school choices.

On the public side, you have all the usual options from crèche upwards to high school (lycée) in the town. Side note: the high school, Lycée Alain, ranks very well in the national polls. It boasts an impressive passing rate for the French baccalauréat exams of almost 99% in 2020 [Source: Liternaute]. Marie-Laure also told us that the town is developing a bilingual English-French option for primary aged kids. You can feel free to contact the city hall – mairie – (or contact us!) to find out more about that.

The town has a number of private options as well. This includes the Malherbe International School which offers English language classes from ages 2 to 14 (middle school). French language and teaching techniques, as well as a Spanish section (3 to 5 years old) are also available. Croissy-sur-Seine, home to the British School of Paris, is also just down the road. While other options, such as L’Ermitage in Masions-Laffitte and the Lycée Internationale in Saint Germain are perfectly doable.

The bourgeois Parisians building their homes in Le Vésinet didn’t take half measures! The roads of the ville-parc are lined with large houses with private gardens, each with their own style.

But if your budget doesn’t include a small mansion, fear not. Le Vésinet has a host of other options, including smaller houses or apartments in the town center and in the park areas.

Prices here are similar to other towns in the area that are popular with expats. They are a bit higher than the average for the Yvelines region but still well below Paris prices. Renting in Le Vésinet costs between €19 and €26 per square meter per month. While buying is between €6,000 and €8,000 per square meter. So compared to Paris, with rent at €30 – €40 per square meter and €10,000 to €13,000 to buy, you can see why so many people choose to look for their new home in the town. [Source: Seloger]

Le Vésinet is a pretty international town, with around 13% of Vésigondins (as its residents are known) born abroad. It is also and unsurprisingly, popular with parents. Households with children outnumber those without, putting it well above the national average in this respect. [Source: Insee]

Smaller than neighboring Saint-Germain-en-Laye, the social scene is perhaps quieter, but the town makes a real effort to welcome newcomers. It has a branch of the national Accueil des Villes Françaises (French Towns’ Welcome) association, which organizes activities year-round to help its newest residents meet their fellow Vésigondins, and also has an association for English speakers. Marie-Laure told us that one of the byproducts of all those big houses with gardens is that kids often play in their gardens than the parks. Get ready for the playdates! Perhaps even leaving the kids with friends while you and your partner sneak off for a lunch in town.

While the origins of the name Le Vésinet are not entirely clear, the most plausible theory seems to be that it comes from the Latin visiniolum or neighboring place. This makes sense as it was, land annexed to a monastery in neighboring town of Le Pecq back in the 9th century (give or take). Now you just have to sign up for the English-speaking association and wait for that question in the pub quiz. Drinks are on you!

We are your friends to lend you a helping hand and put you on the path to success in Paris. Whether it concerns coming, living or leaving we are a group dedicated to making life as easy as possible!

Sign up and get the FREE VIDEO
“French administration for Expats”

Relocating to or from Paris? Questions about settling in or everyday life?

You’re in the right place!

This website uses cookies to improve your experience while you navigate through the website. Out of these, the cookies that are categorized as necessary are stored on your browser as they are essential for the working of basic functionalities of the website. We also use third-party cookies that help us analyze and understand how you use this website. These cookies will be stored in your browser only with your consent. You also have the option to opt-out of these cookies. But opting out of some of these cookies may affect your browsing experience.
Necessary Always Enabled
Necessary cookies are absolutely essential for the website to function properly. This category only includes cookies that ensures basic functionalities and security features of the website. These cookies do not store any personal information.
Non-necessary
Any cookies that may not be particularly necessary for the website to function and is used specifically to collect user personal data via analytics, ads, other embedded contents are termed as non-necessary cookies. It is mandatory to procure user consent prior to running these cookies on your website.
SAVE & ACCEPT