Admiring Paris From a Distance: Our Favorite Parisian Suburbs 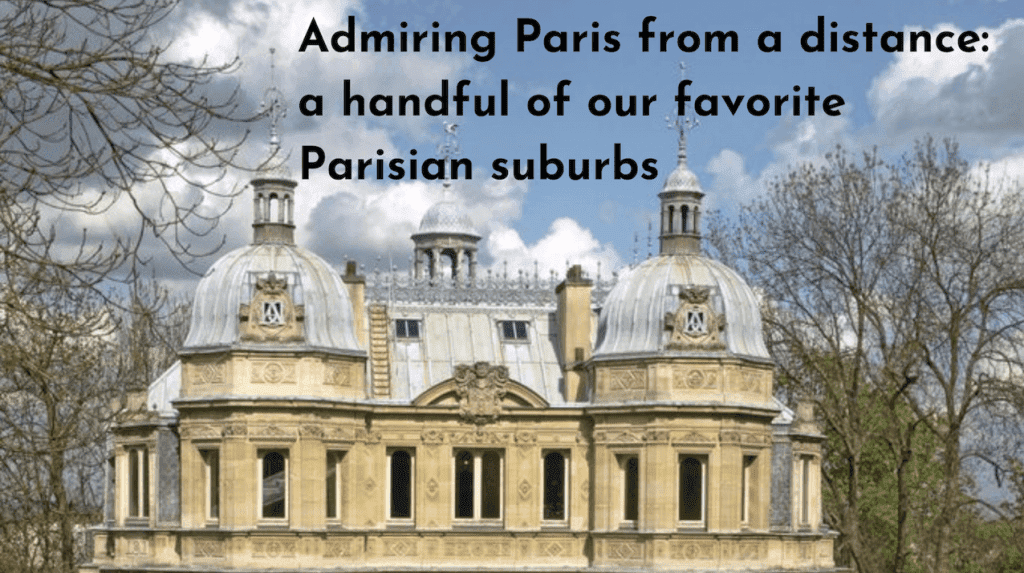 Following our last three blog posts on Maisons-Laffitte, Saint-Germain-en-Laye and Le Vesinet, we’ve curated a list of five of our favorite Parisian suburbs that are popular amongst the expat community. While there are many desirable options for expats wanting to live close to Paris, we narrowed it down to these five based on:

Croissy-sur-Seine is a historic and beautiful town nestled in a loop of the Seine 15 km west of Paris. Rich in heritage, it was treasured by the Impressionist painters for its natural beauty. It was most notably home to the La Grénouillère floating restaurant, immortalized in 1869 by Claude Monet and Pierre-Auguste Renoir in their respective works Bain à la Grenouillère and La Grenouillère.

Its cultural legacy is on full display throughout the town, both in the Musée de la Grenouillère and the many historical monuments that date all the way back to the 18th century. But Croissy-sur-Seine does not live on its past glories and is a fantastic place to live.

Similar to other popular towns in the area, it is connected to Paris by the excellent RER A train line. It gets you into the capital in approximately 20 minutes, and to La Défense in even less. It is also home to the British School of Paris one of France’s top private international schools.

La Celle-Saint-Cloud is another one of our favorite Parisian suburbs for international families, for similar reasons to our other top towns. It’s charming, close to Paris, and has stellar bilingual education options.

Located in the Yvelines department, around 10 km directly north of the department’s capital, Versailles, and around 15 km west of Paris, La Celle-Saint-Cloud boasts a variety of housing options. There is truly something for everyone, from grand detached homes to charming town terraces, and even large residential buildings with shared facilities, such as swimming pools and tennis courts.

Many Cellois, as its residents are known, commute into Paris, picking up the line L of the Transilien train system from either La-Celle-Saint-Cloud or Bougival stations. Residents have told me that the L line is pretty reliable. And it will get you into Saint Lazare within 25 minutes.

There are some solid international education options too. Including the newest campus of the Ecole Internationale Bilingue (along with its five other campuses in Paris), which offers a bilingual education and follows both the French and British curriculums from kindergarten up to middle school. The town also has a Section Internationale, which offers a range of options for English language learning within local French public schools. If you choose to go this route, it’s important to be in the matriculation zone of your school of choice. Make sure you do your research before house hunting (or let us take care of it!).

A bit further down the same Transilien train line are two other lovely towns that offer a more village-y feel: Marly-le-Roi, and L’Étang-la-Ville.

Similar to the other Parisian suburbs we’ve covered, Marly-le-Roi and L’Étang-la-Ville offer a combination of green space, more bang for your buck, and close proximity to Paris.

Residents of both Marly-le-Roi and L’Étang-la-Ville that I spoke with have voiced a fondness of their adopted hometowns because of the laid-back lifestyle, the many activities available to kids, and the 2000-hectare Forest of Marly on their doorstep. Marly-le-Roi also boasts the small but exquisite Château de Monte-Cristo which was built by Alexander Dumas in the mid-19th Century following the success of the Three Musketeers and the Count of Monte-Cristo. It has since been repurposed into a museum memorializing the writer.

When it comes to education, in addition to the local public schools, there is the newer Trillium International School in Marly-le-Roi. It serves children from nursery through primary school (2 to 10 years old). It combines the French and British teaching methods while also placing a focus on small classes and individualized teaching. Many international students in both towns also go to other schools nearby, including the Lycée International in Saint-Germain-en-Laye.

Oh, Versailles! The magnificent UNESCO-listed Château de Versailles and its accompanying gardens attract (in non-Covid times) over 10 million visitors per year. And with good reason: this opulent, outrageous masterpiece is nothing short of breathtaking and should be on everyone’s bucket list. However, unfortunately, none of us will be moving in to the château for the foreseeable future (but one can dream). Nonetheless, we would definitely still consider Versailles to be one of our favorite Parisian suburbs!

So, should you consider setting down roots in Versaille? The answer is yes. And many international families love Versailles for all it has to offer beyond its most famous residence.

The first thing to know is that Versailles is much bigger than the other towns. Capital of the Yvelines department. Its population is more than twice as large as Saint-Germain-en-Laye, the next biggest town on our list. Made up of eight neighborhoods and boasting five train stations. Moving to Versailles means you’ll need to make a decision about which area of the city is best suited to your needs.

While it is geographically further from Paris, Versailles is well-connected and perfectly commutable to the capital, as long as you live close enough to the relevant train station. Versailles Chantier station is particularly well served, with direct lines getting you into Montparnasse or La Défense in about 15 minutes, as well as the RER C line getting you to anywhere along the rive gauche (south bank of the Seine in Paris). You can also easily hop on the L line from Versailles Rive Droîte and Montreuil stations, which gets to Saint Lazare in about 40 minutes.

Of course, you have all kinds of housing options, with prices determined according to proximity to train stations and the château. There are, as you would imagine, loads of shopping options. Residents rave about the local market.

In terms of nearby school choices, there is an international section in the town. It offers a bilingual education for students at the college and lycée levels. Two of these institutions are the Catholic Collège du Sacré Coeur and the Lycée Notre-Dame du Grandchamp. There are also a number of English language choices for children who are of primary school age, including Our School, and several Montessori nursery schools.

Do you feel inspired by all of your options now?

You should, as there are so many remarkable towns around Paris that international families love to call home. While we’ve given you a taster of a few of our favorite Parisian suburbs, our mission is to help you find your perfect place. So, don’t hesitate to book a 30-minute consultation with us. Let’s talk about what’s important to you in starting your new life in France.